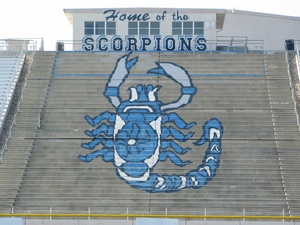 The mascot of Adolfo Camarillo High School is a giant blue, silver and white scorpion. A painting of the Scorpion can be seen on the cement part of the home bleachers at the stadium which is visible from the 101

At one point when the stadium needed to be repainted but the original painting was very faded, a geometry class was tasked with making the image look correct even though it's painted on bleachers. (confirmation needed)

While originally named after the F-89 Scorpion airplanes stationed at the Oxnard Air Force Base (now Camarillo Airport) in the 1950's, the mascot has always been the animal.

The high school has, on occasion, made use of a scorpion mascot costume for a spirited student at sporting events and rallies. (photo anyone?)