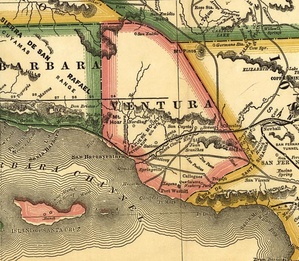 Springville got more press than Adolfo's town in the early days. Rand McNally, 1883. Springville was a town that developed at roughly the same time as the city of Camarillo. The towns competed for a while, but eventually Camarillo won out. Until recently, the only thing left of Springville was a cluster of dilapidated farm houses just off of Lewis Road near Las Posas Road. The Ventura County Fire Department burned these houses in a training exercise in the early part of this century (about 2004, perhaps) so little is left of this piece of history.