Since its first years, Concert Singers of Cary, has planned to establish auxiliary choirs to serve various populations in the community. This was re-affirmed by the Board of Directors at a 1997 retreat and in early 2000 with the adoption of a five-year strategic plan. Under the leadership of former Assistant Conductor Stephen J. Mulder, planning began in earnest in late 1999 for a program serving children in grades 3 through 6 and began in September 2000. The choir was named Cary Children’s Concert Choir (C4). In the Fall of 2009 the program was expanded to include a new choir for older singers in grades 6 through 9, called the Cary Youth Chorale (CYC). 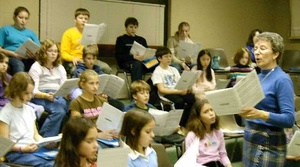 If there is one thing that defines Cary and its community, it is children and families with children. The creation of a children’s chorus to perform alone and occasionally with the adult chorus has several benefits:

In contrast to many community groups that are auditioned and highly selective, it is the goal of this organization to be as inclusive as possible. Auditions will be required for acceptance (with a parent present during the audition) and children are only excluded from participation under the most extreme circumstances. Our mission is to provide young participants with all of the skills and experiences that are conducive to life-long music-making. 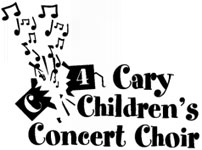