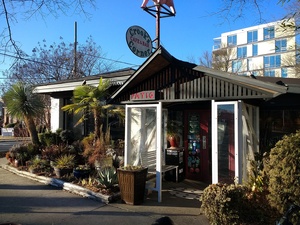 Heralded by The New York Times as a "sacred ground for Southern foodies," Crook's Corner is known for its locally sourced Southern cuisine. The restaurant is located on Franklin Street in Chapel Hill, N.C. and is credited with popularizing Southern staples like Atlantic Beach lemon-lime pie and shrimp and grits.

Crook’s history begins in the late 1940s, when Rachel Crook ran a fish market and cafe where Crook’s currently stands. Following her death in 1951, the building served as a bait and tackle shop and pool hall. It then stood deserted for years, until 1978, when a Chapel Hill native remodeled the building and opened a barbecue house, calling it Crook’s Corner. In 1982, local chef Bill Neal purchased the remains of the barbecue joint and opened the current iteration of Crook’s Corner.

Specializing in Southern comfort food, Crook’s Corner serves classic dishes like fried oysters, cornbread and Hoppin’ John. The menu, which changes frequently depending on the availability of local produce, is posted daily in the late afternoon.

Known as the “Home of Shrimp and Grits,” Crook’s Corner is often cited as the birthplace of the dish, one of the most iconic in Southern cooking. Head Chef Bill Smith is also known for his Atlantic Beach lemon-lime pie, a mash-up between Key lime and lemon meringue pie. Culinary publications, including Food 52 and The New York Times Cooking, have published the recipe online.

Head chef and former owner of Crook’s Corner, Bill Smith, is a bonafide Chapel Hill celebrity. Originally from New Bern, N.C., Smith is known to be humble, often underselling the impact his 47-year residence in Chapel Hill has had on the town’s local art and music culture.

Smith’s colorful musical, literal and artistic background is evident in his recipes and culinary essays. Many sources credit his cooking as a driving force behind the revitalization of Southern cooking, and he has been featured in national publications, including The New York Times. In 2011, the James Beard Foundation awarded his work at Crook's an America's Classic Award for "Timeless appeal, beloved for quality of food that reflects the character of their community.” Smith, fully embodying his hometown pride, accepted the award in a full-piece Carolina blue suit and tie.