Forest Theatre is a stone outdoor amphitheater on the campus of the University of North Carolina at Chapel Hill. It was built into the hillside on the eastern edge of the university between South Boundary Street and Country Club Road. William C. Coker, a former botany professor at the university and founder of Coker Arboretum, chose the location for the theater. 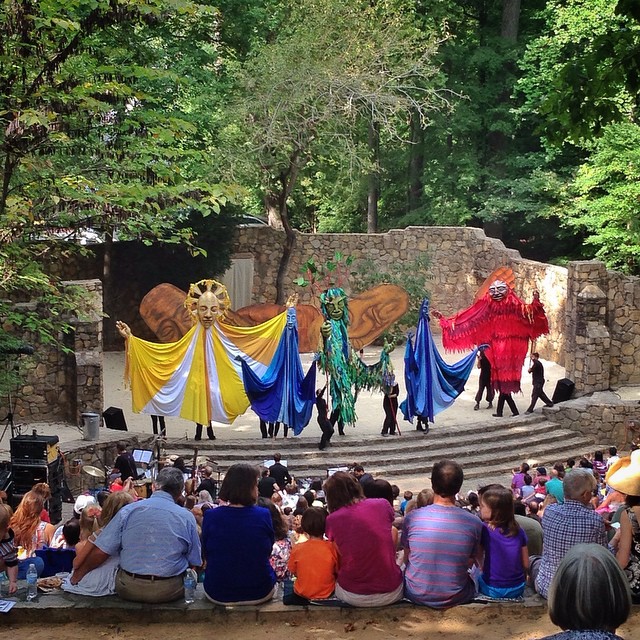 The first theatrical performance at Forest Theatre took place in 1916 to celebrate the 300th anniversary of William Shakespeare’s death. Shakespearean productions have since been regularly performed at the location. UNC professor Fredrick Koch, who founded the Carolina Playmakers in 1918, developed Forest Theatre into a permanent performance site a few years after that first performance.

The theater was rebuilt in 1940 with Works Projects Administration funds. Albert Bell, designer of outdoor theaters in Manteo, Cherokee and several other sites, developed the new design. The theater was further improved in 1948.

Today, Forest Theatre is a part of the North Carolina Botanical Garden, which manages and schedules its bookings. It is also the home of the Paperhand Puppet Intervention summer festival.

The Forest Theatre is available mid-May through July for wedding ceremonies and events. If interested in reserving the space, contact the theater's event manager.

The Knot review “An absolutely beautiful venue for an outdoor wedding.”

Yelp reviews “It's a great spot to check out even if there's nothing officially going on here.”