In the college town of Chapel Hill, North Carolina, near Old Chapel Hill Cemetery, there is a dead end road named Gimghoul. The short street with the foreboding name lies in the quaint residential Historic Gimghoul District. Before the road ends, it turns into a gravel path surrounded by a grove of trees. Beneath this canopy lies Gimghoul Castle. A pair of towers rise, one flat with battlements, one pointed, over a porte-cochère and a castle with tall thin windows.

The castle, originally named Hippol Castle, began as 40 vacant wooded acres called Piney Point (also referenced as Piney Prospect). The original owners sold about 35 of those acres to finance the construction of the castle. The structure was completed in 1924 using approximately 1,300 tons of rough French stone. The final cost of the building is estimated at the tidy 1924 sum of about $50,000, which would be $700,000 in 2016. Since 1924, the castle has been a source of myths and legends in Chapel Hill. 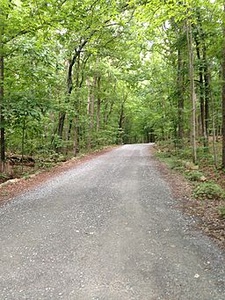 The unpaved end of Gimghoul Road
Photo by Oterrell There are many legends surrounding Gimghoul Castle, especially ones involving duels, knights and ghosts. The most common legend tells of the disappearance of University of North Carolina at Chapel Hill student Peter Dromgoole.

Though the details depend on the storyteller, the legend says when Peter arrived in Chapel Hill from Virginia there were few eligible women because the university was restricted to male students only. Young men often had to request a meeting with the woman’s parents to see their daughter. A woman named Miss Fanny struck Peter’s fancy and he fell in love with her. The two were known to have dates at Piney Point, a gathering spot for students with a view of Durham and Raleigh.

Meanwhile, another man was also in love with Miss Fanny and challenged Peter to a duel, a common way of settling issues at the time although condemned by the university. In one version of the legend, Fanny hid her love for Peter from the other man.

The duel occurred at Piney Point, the site where Gimghoul Castle would be later developed. Peter was killed in the duel and supposedly buried in a shallow grave with a large rock placed on top. One version of the story claims that Peter was shot through the heart as Fanny arrived and he died in her arms before he was buried. The rock is still there today with Peter’s blood stained on it, according to the legend. Although, geologists at UNC claim the stains are rust.

Oddly, there are other accounts of Peter coming to UNC-Chapel Hill for school and not meeting Fanny or the nameless killer. Upon Peter’s arrival, he fails his entrance exams and flees to Europe without a whisper. Peter’s family sends his uncle to find him and supposedly created the story of the duel. Another account tells the same story with Peter joining the military. The true whereabouts of Peter remain a mystery. 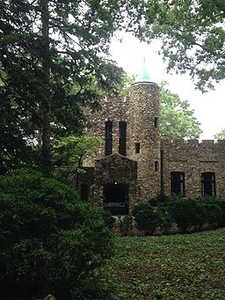 Gimghoul Castle
Photo by OterrellGimghoul castle is known as the meeting place for the Order of Gimghoul, an elitist secret society. The Order of Gimghoul formed in 1889 by students of the University of North Carolina, including Edward Wray Martin, William W. Davies, Shepard Bryan, Andrew Henry Patterson and Robert Worth Bingham. The secret society remains in existence today. Membership is limited by invitation only to male students and faculty of the university.

The Order of Gimghoul originated as the Order of Dromgoole, based on the tale of Peter Dromgoole’s murder at the site of the castle before it was built. The society originally met in a lodge on the corner of Rosemary and Boundary Street in Chapel Hill. In 1915, the Gimghouls purchased several hundred acres near the college campus, called Battle Park, where Peter Dromgoole was claimed to be killed. The land was divided into three parts: one donated to the university to preserve the park; one sold for residential development; and the other kept to build the stone castle.

UNC-Chapel Hill professor Thomas F. Hickerson, who taught civil engineering and applied mathematics, assisted in planning the castle as an alumnus of the society. He served as custodian, advisory and primary contact of the Order of Gimghoul until his death in 1967. Another alumnus and trustee of the Order, George Watts Hill, Sr., also contributed a significant amount of funds to preserving the castle until his death in 1993. 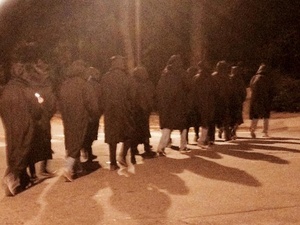 Currently, the castle remains the gathering place for the Order of Gimghoul and is off limits to the public. The Order’s members can be seen holding candles and covered in black cloaks with their faces hidden walking past Coker Arboretum toward the castle each year when the clock strikes midnight on October 31. The members chat in an unrecognizable lingo while heading to Forrest Theatre where they line up on stage before extinguished their candles and rushing off to the castle.

Records of the Order are housed in the university archives at the Louis Round Wilson Special Collections Library. Documents include correspondence, minutes of meetings, financial records, constitutions and bylaws, membership lists, descriptions of rituals, photographs and newspaper articles about the Order of Gimghoul. Materials more than 50 years old are viewable to the public. Documents less than 50 years old are restricted to members of the Order of Gimghoul only.

The Order was initially established on ideas of chivalry, although the purpose of the society today remains a mystery.