Rise Biscuits & Donuts is a fast-service, line-style biscuit and doughnut shop in Carrboro, North Carolina, in East Main Square that prides itself on preparing and cooking everything fresh daily. 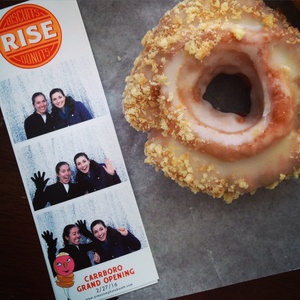 Rise Biscuits & Donuts had their grand opening on Feb. 27, 2016. That morning, customers were given free print-outs of photographs taken by the store's entrance. Pictured is an old-fashioned  cake donut with lemon icing.

The original Rise location opened in 2012 in Durham, and the store in Carrboro opened on Feb. 24, 2016. There are now five locations, with three coming soon.

Rise is a unique doughnut shop in part because of its variety of flavors. “Old school” doughnuts include classics like plain glazed or chocolate frosted. The “new school” category features more avant garde flavors like s’mores and maple bacon. In addition to those categories, each Rise location has its own menu with specials like “Cheerwine Icing” (a spin off the cherry-flavored soft drink made in North Carolina) and “Salty Cap’n,” a caramel-glazed doughnut topped with the popular children’s cereal, Cap’n Crunch.

The doughnuts are only part of what makes Rise so tasty. Each location features a biscuit menu with a variety of fillings to choose from, including eggs, cheeses and spreads. In the same vein as the doughnut menu, Rise also features biscuit specials such as a “Pig in a Blanket” or “Fried Green Tomato” biscuits. 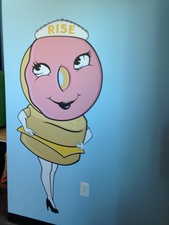 Inside the store is this life-size character graphic.

Rise offers pre-ordering for biscuit and doughnut orders of 24 to 100 items when ordered at least one day in advance. Customers can customize their orders by size, flavors and other add-ons. 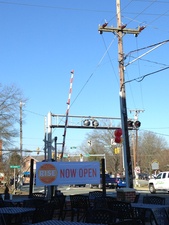 The store is located on East Main Street, next to Fleet Feet Sports. The grand opening was Feb. 27, 2016.