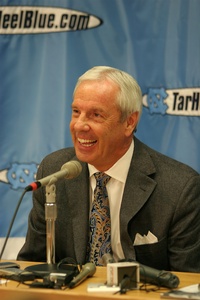 Roy Williams is the current basketball coach for the North Carolina Tar Heels, where he has coached since 2003. The Asheville, North Carolina native and former UNC junior varsity player's first coaching job was under UNC's Dean Smith from 1978-1988. He then went on to coach Kansas from 1988 until his return to UNC in 2003. He has won two national championships, both with the Tar Heels (2005 and 2009). Williams was named Coach of the Decade by ESPN, Sports Illustrated, Sporting News, and Fox News for his 2000-2009 success with Kansas and UNC. He is an inductee of the Naismith Basketball, College Basketball and North Carolina Sports Halls of Fame.

In 2015, Williams and a few of his fellow UNC coaches faced heavy scrutiny when an independent investigator reported widespread academic fraud by athletes at the university. The report claimed the fraud spanned at least 18 years and involved 3,100 students, roughly half of whom were athletes. The NCAA focused on 2002 - 2011 and the American and Afro-American Studies department, specifically scrutinizing at the football, men's basketball, and women's basketball programs and their "lack of institutional control." A further investigation by UNC revealed violations by the men's soccer team, and additional infractions by the women's basketball team.

In April 2016, the NCAA released a new Notice of Allegations that primarily focused on women's basketball and removed much of the blame from the football or men's basketball teams. No sanctions have been imposed.