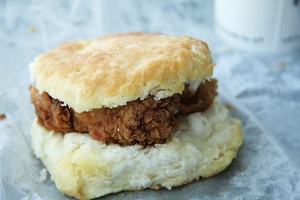 Sunrise Biscuit Kitchen, an award-winning drive-through breakfast joint, is known for two things: mouth-watering biscuits featuring the owner David Allen’s grandmother’s recipe and being worth the wait. The Chapel Hill location, a mile east of the University of North Carolina at Chapel Hill, opened in 1984. The Louisburg, NC, location opened in 1978.

Allen and a fraternity brother opened their first restaurant in 1977 in Henderson, NC. They had worked together at a pizza restaurant and were inspired when that restaurant began offering breakfast. Drive-through restaurants for breakfast were not standard in 1977, and Sunrise Biscuit Kitchen was one of the first.

Sunrise Biscuit Kitchen, awarded one of the best breakfasts in the South by Garden & Gun Magazine, has won numerous awards in “best of” contests locally and nationally. The secret to their success are in the biscuits; a recipe Allen credits to his grandmother.

The menu offers breakfast and lunch homemade. Large homemade biscuits may have meat, egg and cheese, or a combination of the three added. The “Bad Grampa” is a chicken, egg, cheese and bacon biscuit with a side of hash browns and sweet tea for $9.06. Sandwiches, platters and combos are also available.  The most requested item on the menu is the chicken and cheddar biscuit.