The iconic Andersonville Water Tower, located on top of the Swedish American Museum and painted with the Swedish Flag, was removed to the Museum's parking lot on the corner of Foster and Ashland on March 20, 2014.

According to news sources, the Tower was another victim of the brutal "Chiberia" winter we have had in 2014, as the entire structure became frozen solid and structurally unsound. One of the most recognizable symbols of the neighborhood's Swedish roots, many residents are disheartened by the Water Tower's removal. 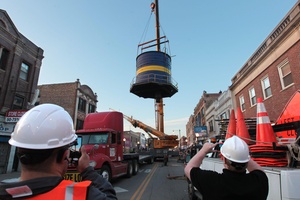 The museum's executive director has been quoted as saying that the tower is believed to have been around as long as the building, which was built in 1927.

Safety first: To read more about the removal and reasons behind it, check out the stories from DNAinfo Chicago, CBS News Chicago, and the Chicago Tribune.

Information about whether or not the Tower will be replaced is conflicting, depending on what source you follow. The Swedish American Museum has a post on their website stating that they "hope to be able to repair and renovate the water tower so it can once again return to the roof of the Museum. If that is not possible, we want to make sure that any new solution would include creating a new iconic landmark for our neighborhood that would honor Andersonville’s Swedish heritage." They are working with Groupon Grassroots to start a fundraising campaign.