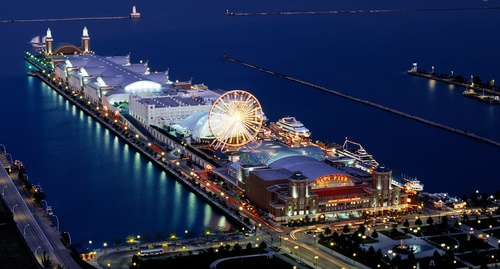 Navy Pier is one of the most iconic locations not only Chicago, but the entire Midwest. The 3,300 foot long pier is located alongside Lake Michigan. Welcoming nearly nine million visitors annually, Navy Pier is the top ranked leisure destination in the Midwest. However, this was not always the case. When it opened in 1916, as Municipal Pier, it was originally designed for shipping and recreation purposes. Yet, 100 years later the pier as become a prime entertainment center. Over these 100 years, Navy Pier has developed a rich history.

When Daniel Burnham originally envisioned Municipal Pier he wanted there to be four additional piers. However only one was approved to be built and in 1914, under the guidance of architect Charles Sumner Frost, construction began. Two years and 4.5 million dollars later, Municipal Pier opened to the public.

For a year, Municipal Pier served its intended function as a dock for freights and also an indoor and outdoor space for public recreation. However, in 1917 when the U.S. entered World War I, the Pier housed several regiments of soldiers, Red Cross and Home Defense units as well as a barracks for recruits. By 1921, to accommodate for increased visitors, Municipal Pier had added its own streetcar line, theater, several restaurants, and an emergency hospital. In 1918, the pier was also used as a jail for draft dodgers. In the summers of 1921 and 1922, nearly a million people visited the 15-day Pageant of Progress hosted at Municipal Pier. In 1927, Municipal Pier was renamed to its current name Navy Pier, to honor those who served in the Navy during World War I some of whom had been stationed there.

The 1930’s marked a hard time in American history. After the stock market crashed in October of 1929, a period known as the Great Depression began. This period would not end until the start of World War II which helped kick start the American industry. During the peak of the Great Depression, nearly 15 million people were without jobs and nearly half of the country’s banks had failed.  Because of this, Navy Pier lost a lot of business from freight and passenger trains. However, cultural and recreational use of the Pier remained strong with the World’s Fair in 1932 drawing 1.5 million visitors. 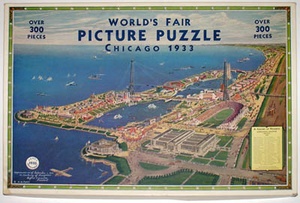 In 1942, during the second World War, Navy Pier was used for pilot training. In total 15,000 pilots were qualified for military service at Navy Pier including George H.W. Bush, the 41st President of the United States. Throughout the war, the Navy also used the Pier for other training programs and after its conclusion over 60,000 people, from several different countries, had been trained there.

In 1946, after the war was over, the Navy left the Pier and the University of Illinois took its place. The University of Illinois reshaped Navy Pier into a two-year undergraduate branch campus and changed the Navy’s main mess hall into a library which was considered “the largest reading room in Illinois.” The university stayed there until 1965 when it was relocated to a different part of the city called Circle Campus. The relocation was due to exceeded growth of the school from maximum capacity.

In the 1950s, Navy Pier hosted most of the big trade shows in Chicago. Annually, about 12-16 tradeshows, exhibits, and social events were held at Navy Pier. This continued until McCormick place opened in 1960. In 1959, South Dock was constructed and widened the Pier by 100 feet. This was a much needed addition to accommodate the 250 oversea vessels that used Navy Pier as a port annually.

In 1967, McCormick Place was destroyed by a fire and Navy Pier went back to hosting the major shows. This lasted for about four years until McCormick Place was rebuilt and reopened which caused Navy Pier to fall back into disuse. For the next five or so years, there was little going on at Navy Pier. The biggest highlight of this time period was Navy Pier being named a Chicago landmark in 1977 by Chicago’s City Hall. 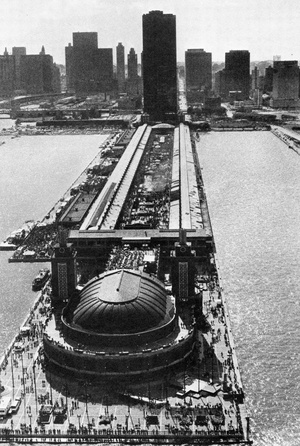 From 1978-1982, Navy Pier hosted ChicagoFest. This festival, which lasted roughly two weeks during the summer, drew millions of visitors.  At ChicagoFest, there were sixteen separate stages each of which was sponsored by a different retail brand. Altogether the sixteen stages held around 600 performances during the two-week period; with many famous people such as Frank Sinatra and the Blues Brothers performing over the years. In 1982, the last year of the festival, many black entertainers such as Stevie Wonder cancelled their performances in solidarity with black Chicago residents angered by mayor’s the nomination of three white board member to the Chicago Housing Authority. This ended up costing the festival millions of dollars and was one of the reasons for its cancelling the subsequent year.

In 1989, the Metropolitan Pier and Exposition Authority was created by the Illinois General Assembly. They were in charge of managing both McCormick Place and Navy Pier and quickly began redesigning the Pier to become one of the countries biggest tourist attractions.

After closing in 1994 for redevelopment, on July 12, 1995 Navy Pier re-opened.  The $150 million project completely transformed Navy Pier and added a variety of year-round entertainment, shops, and attractions, highlighted by the unveiling of a 1,500 seat outdoor Skyline Stage.

For the next two decades, Navy Pier hosted numerous large public events. In 2007, it was named the number one tourist attraction in Chicago. In 2013, the city announced a $1.1 billion tourist redevelopment program that included renovations to the Pier. One of these renovations was a new 22.5 million dollar Ferris wheel. The Ferris wheel was a DW60 model purchased from Dutch Wheels which is the first and only one of its kind in the U.S. It is 196 feet tall, 50 feet taller than the previous Ferris wheel. Other attractions include sightseeing and entertainment cruises, the Chicago Children's Museum, the Chicago Shakespeare Theater, a one acre indoor botanical garden, and many other outdoor attractions. Navy Pier was reopened to the public on May 27th, 2016. With the addition of this new Ferris wheel, Navy Pier continues to be one of the biggest attractions in America and doesn’t look to be slowing down soon. 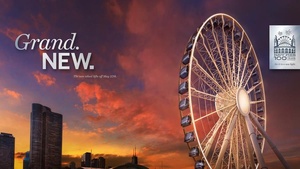