“Go, Cubs, go! Go, Cubs, go! Hey, Chicago, what do you say? The Cubs are gonna win today!” That is what you’ll hear from the loud stadium filled with baseball fans located on 1060 W Addison Street after the Cubs win. The baseball stadium, Wrigley Field is located in Chicago, Illinois. It’s in a neighborhood known as Lakeview or most specifically, Wrigleyville. Wrigley Field is surrounded by apartment buildings, bars, and restaurants. It is difficult to not have a fun time during any Cubs game! However, before Wrigley Field officially existed in 1926, home to Sammy Sosa, Ernie Banks, and Billy Williams to name a few, it was originally known as Weeghman Park, named after the original owner, Charles Weeghman. Weeghman’s baseball team was known as the Chicago Whales until the Federal League broke up in 1915. However, during this time the Chicago “Cubs” did exist. Just not as the Cubs but as The Chicago White Stockings since 1886. Then, Chicago Colts in 1890. After that, the Chicago Orphans were born. And finally, in 1903, the Chicago Cubs name finally came about and stuck with them ever since. While The Chicago Whales were playing at Weeghman Park, the Cubs were playing at West Side Grounds. West Side Grounds was located at the intersection of South Wolcott Avenue and West Polk Street on Chicago's West Side. This park is located about 10 miles southwest of Wrigley Field. Pictured below is the construction progress of what will soon become Wrigley Field. 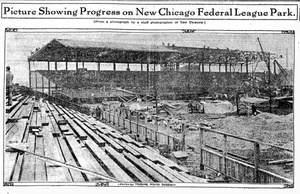 The baseball stadium ultimately got the name Wrigley Field right after the Wrigley family purchased the team from Weeghman in 1920. It was named Wrigley Field in 1926 in honor of William Wrigley Jr., also known as the club's owner. 90 years later, in 2016 the Cubs finally won the World Series in Wrigley Field since winning in West Side Grounds 1908! After being owned by Wrigley, the stadium began to revamp their interior and exterior appearance to what we can identify today. The original capacity in the stadium started off with 14,000 people. Today, Wrigley Field can hold about 41,650 people and it has become a popular spot for entertainment with big headliner acts from Chris Stapleton, Guns N’ Roses, Mötley Crüe, Def Leppard, and Lady Gaga to name a few recent acts. Today, when you spot the interior from the outside the first traditional landmark someone will easily identify is the classic large green scoreboard that shines by the bright sun at golden hour during the evening home baseball games. 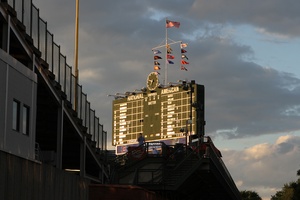 There was once a myth that Wrigley Field was cursed from 1945 to 2016. It involves many freak incidents that occurred at Wrigley Field which costed the Cubs from winning the World Series. Some curses include, the goat visit, the black cat, and the infamous Bartman catch. In 1945 during game 4 of the World Series games, the game included Indians fans and Cubs fans. William "Billy Goat" Sianis was stopped at the entrance gate with his goat. Officials say that Sianis stated, “You are going to lose this World Series and you are never going to win another World Series again.” And surprisingly, they lost the game and lost the chance of getting the World Series Championship title and everyone believes Sianis and his goat started the curse. In 1969, “a black cat ran on the in front of the Cubs’ dugout during a game at Shea Stadium as Chicago faltered and fell out of playoff contention.” And one of the most popular incidents that accidentally occurred originated by an excited Cubs fan known as Steve Bartman. In 2003, during the game 6 playoff game, a baseball was hit by the rival team which reached near the stands. This ball was suddenly caught by the excited Cubs fan, Steve Bartman making it a home  run. This catch changed the outlook of the game, the Cubs championship title once again, and the future of Steve Hartman forever. Everyone blamed Bartman for making the Cubs lose that title in 2003 and he was one of the most hated men in the Chicagoland area. The anger from Cubs fans was extremely aggressive that Bartman needed to receive special security outside of Wrigley Field since authorities were concerned for his safety. For over a decade, Barman stayed silent and away from the public eye due to all of the hate and threats he received. However, in 2016 when the Cubs finally won the World Series Championship title, Steve Bartman was given an official Cubs Championship ring as an act of gratitude to reunite him with the Cubs family. 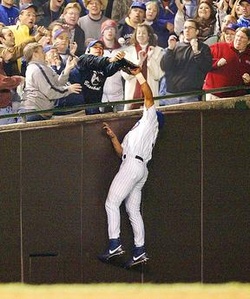 Today, Wrigley Field has many renovations and extensions as this stadium continues to evolve and create many historical memories. After the spring and summer baseball season Chicagoans can still enjoy the blue and red Cubs atmosphere while ice skating at Gallagher Way, right next to the field. Here, people can enjoy live music, enjoy delicious restaurants, attend fitness classes, or experience movies which is all friendly towards adults and children. Today, the Wrigley Field owner, Thomas S. Ricketts wants to add in a new digitized jumbo screen behind the stand in left field. Many people may be grateful for this new renovation as it may be difficult to read the traditional manual green score board from the farthest seat in the stadium. However, Ricketts will not be removing any traditional items and fan favorites from the stadium like such. However, the ivy leaves in the outer field have been replaced by a holographic device. The ivy leaves were being sold for $200 each. And of course, extreme Cubs fans were happily buying them. Most fans are proud to know the curses are lifted! Wrigley Field will continue to be home for the Chicago Cubs and hopefully more W flags will continue to blow in the wind during the next home games at Wrigley Field. 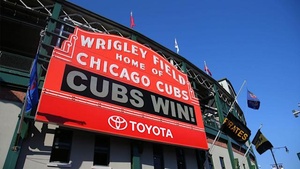