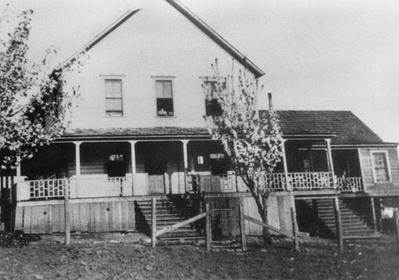 The 14 Mile House is a site on the Old Humboldt Road which was named as a historical monument by the legislature in 2001.1

In June 1864, the Chico and Humboldt Wagon Road Company was incorporated, and John Bidwell and other Chicoans received the franchise to construct a road to connect the City of Chico with the Idaho Mines. Nick Spires built accommodations on that road at a site located on the rim of Little Chico Creek Canyon for travelers and their livestock. Paul Lucas bought the land from Nick Spires, and Paul Lucas' son, John Lucas, built a fine two-story hotel. The hotel, a slaughter house, and a hide house, which later served as a school for Chico Canyon children, were collectively referred to as 14 Mile House. Soon after the turn of the 19th century, the toll house that was adjacent to the road was moved four miles north, nearer to today's Forest Ranch, and the last remaining 14 Mile House building, the old barn, disappeared in the 1960's.