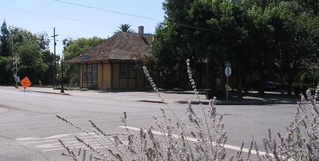 The Amtrak Station (formerly called the Southern Pacific Railroad Depot and the California & Oregon Railroad Depot) at Fifth and Orange is a train station and historic building in Chico which was added to the National Register of Historic Places in 1987. A 550-foot concrete platform will be added to the station to comply with the Americans with Disabilities Act. Amtrak will be funding the project with money from the federal stimulus program. Construction of the platform should be completed by July 2010.

Amtrak is one of several transportation methods in and out of Chico. The Coast Starlight train passes through Chico on its route between Seattle and Los Angeles. It first major stop southbound is Sacramento. Both trains arrive in the middle of the night, with the southbound arriving just before 4:00am and the northbound just before 2:00am. In addition to rail service, Chico is a stop for Amtrak's Thruway bus service. There are multiple Amtrak buses that serve Chico throughout the day. For schedule and reservation information, please see the Amtrak website or call 1-800-USA-RAIL. The railroad that passes the depot is now owned by Union Pacific Railroad.

There is a seating area inside with a public bathroom, water fountain, and vending.

Greyhound has a ticket office in the building with limited hours and the Glenn Ride bus also stops at the station. In 2008, the B-Line began making stops for route 6.

The building is adjacent to the Chico Art Center, and Empire Coffee if you need to fill your coffee and tea needs.

It was originally a California and Oregon Railroad depot. The C&O Railroad laid the original track through Chico in 1870. However, the depot building was built in 1877.

Amtrak was not created until 1971 (ironically under then President Nixon). If you said or wrote "Amtrak" in 1952 no one would have known what you were talking about. It would have been referred to in 1952 as the Southern Pacific station or simply the "S.P. station" until the 1970s.

The City of Chico and the Chamber of Commerce saved the station from certain demolition with an agreement with Southern Pacific Railroad. In 1987, the Chico Heritage Association applied to list the station as a Historic Place. It was subsequently approved1.