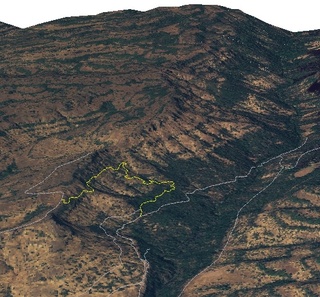 B Trail Elevation Profile. As described in the article, it's a pretty steep trail. By RyanMikulovsky B Trail was built by mountain bicycling enthusiasts, so it might not be the best place for a hike in Upper Bidwell Park, though it is quite fun if you're fit and on the lookout for riders. It starts off at an elevation of about 1400ft and winds downward nearly 620 feet in under a mile. While that may seem like a gradual descent, it really isn't (relatively), since at first you will hike a relatively benign path for about 1500ft, and then you'll begin a fairly rapid descent. Towards the end, the trail's grade levels off for another thousand or so feet until it meets up with Upper Park Road. There are a good many switchbacks that would challenge possibly even the seasoned mountain bicyclist.

To get to B Trail, follow the North Rim Trail for about 4 miles. Just before the trail veers sharply to the west, there will be a marker for B Trail on the right. If you'd prefer to work your way up, it can be found between lots R and S or at the end of Middle Trail.