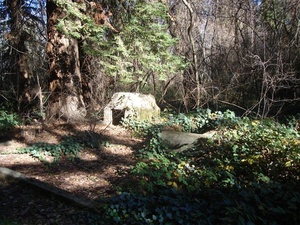 The Bear Cage is a piece of Chico lore. It was supposed to be located in Bidwell Park near the Deer Pen and the Chico Creek Nature Center. Legend has it there was a small cage that may have once housed a bear, which was a part of a Chico Zoo (see photo below, left) that may have previously existed. Rumors have also alleged that the cage may have housed a fox, although that may have been a separate and unrelated cage. Most old-timers in Chico will have heard about this, although it seems much more of an urban legend in which everyone knows someone who remembers seeing it.

"Bear's Lair": proof of a bear once living in Bidwell Park?

There is a remnant of what was supposed to be the bear cage that can still be seen. There is a small "house" that gave shelter to the animal (center of photo to right), a trough that would have been used for food and water (right side of photo), and a concrete border around the entire thing that would have had fencing installed to create an enclosure (foreground of photo). It is located a little out of the way between the Deer Pen, the Nature Center and the pathway of Lower Park. In addition to the bits of the cage that are still remaining, the picnic area near the Bear Cage is named "Bear's Lair" which implies that there may have at some point been bears in the area.