"Bear Hole","39.7779","-121.752433" is a part of Big Chico Creek in Upper Bidwell Park. It is used as a swimming hole, as the water is especially deep here in the late spring and summer. Diving off of the high rocks is a popular activity at Bear Hole, but swimmers should be aware that this is incredibly dangerous and can lead to serious injuries that could be deadly. Additionally, the water currents can move quickly through the area, so swimmers should be careful to not get caught in faster moving waters that could trap you. The map above shows the location of the bear hole parking lot.

In addition to swimming, sunbathing is popular at Bear Hole. It seems the further one moves up Upper Park Road the more optional the users find clothing. Bear Hole is one of the more accessible swimming holes, compared to Salmon Hole and other spots further up, but some less-clad individuals can be found here as well. On a hot summer's day, sunbathers can be found strewn about on top of the rocks, taking in the sun's rays to enhance their tans.

Bear Hole is accessed from Upper Park Road. There is a small parking area (Area K), with a short walk from there to the swimming hole. It is located not far from the Diversion Dam. As a part of Bidwell Park, all park rules apply, including the alcohol ban and the glass ban. 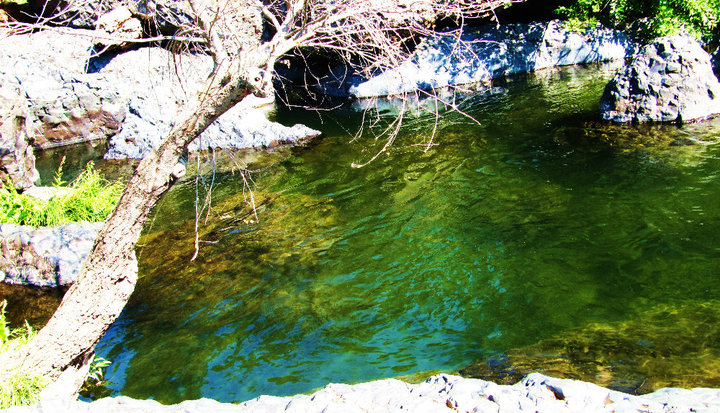 2008-05-19 22:51:11   Wish I could find this on a map so I could map it here using the address macro. :-\ I've actually never gone swimming at Bear Hole because it's always been far far too busy. Just downstream there are some less popular spots where it's less rocky but far more sediment. The stuff upstream has always seemed a bit... dangerous to get to (except towards the end of Upper Park Road). But I'm a transplant and have much to learn. —RyanMikulovsky

2009-08-25 10:53:45   Bear Hole was great! My dog and I hiked up on the , climbed boulders for an hour, took a dip in the Big Chico, watched the trout surface feed, then watched bats destroy the mosquito population, all while enjoying a beautiful sunset. Amazing! Oh, with regartd to the above posts, the road is closed to cars Sunday and Monday, consequently there are few, if any, other folks there. I saw no-one, and it was still about 95 degrees.—76.204.229.134

2012-09-03 19:58:52   I've been to Bear Hole twice. 4 drowning deaths in 1999. In 2012, a young man was critically injured jumping from some height into the water. Would a very conspicuous sign warning of dangers be so aesthetically displeasing? It's as predictable as a Kibuchi Dance that there will be more of a human toll. There is no governmental duty to warn on recreational land, as far as I know. I guess there are the purists. Still, it is beautiful, but it can be a death trap for the unwary at times. Downstream, just a bit futher down the Yahi Trail, beauty also abounds around the creek, with large boulders of basalt, and labs and other dogs frequently frolic in the more shallow stream. I saw a young family having a wonderful time swimming down there. Perhaps the drowning deaths happen during a particular season. Maybe it has something to do with the flow. There is definitely a current underneath the shimmering surface. —71.193.47.89

I’ve been to bear hole twice. The first time was just to hike around. And the second time was yesterday. If you choose to swim around the area I’d really suggest you check and look around the surrounding area you’ll swim in. I had a horrible experience yesterday. Yesterday I went to swim at bear hole, not even 10 minutes in the water and fear struck me. I tried swimming across the water, I seen there was a current but there was rocks so I figured if anything happens I’ll just be sent towards the rocks. WRONG!! Suddenly within a blink of an eye I’m yelling for help. I had a foot on a rock and the other one was floating, I step down thinking the rock will be there and I get sucked into a underwater funnel. I went deep into the boulders, who knows how deep. I lost all my breathe at a point, and that’s when I knew I was dead. Once my breathe was all gone and I could feel myself drowning I knew that was going to be it. Everything was pitch black and I felt all the rocks scrape my body as the current took me. The tunnel was very narrow and I was trapped between the rocks. I felt the walls & all I felt were rocks around me. I tried to swim where I got sucked in from but it was so hard.  My body grew weaker the more I struggled. Within another minute I felt my body drowning in water, I no longer had any more oxygen. What was filling me now was the water. I gave up honestly, I stopped fighting. I kinda gave up & accepted it at this point. As my body weakens I see a glimpse of light and so I start swimming upwards.. ( keep in mind I’m probably a couple feet underneath the boulders ) I start getting hopefull. I finally make it above the water for a split second. Literally 5 seconds or less. I’m choking and spitting all the water that I’ve drank. I hear my friend yelling and I feel my boyfriend grab me from my legs. I get so happy because I think I’m safe at last. At least that’s what I thought. I feel my boyfriend let go and I knew I would go back down. I then go back under the tunnel of boulders and find myself somewhere else. At the point, I grew very weak. I hit the shore and I see a group of girls. I beg for help but they didn’t help me right away. One girl out of all them put her hand out to grab me. I felt so weak and small. I couldn’t catch my breathe, I was coughing up water. It was the biggest nightmare I’ve ever had. And I never wish anyone to experience what I experienced, so please if you decide to go here. PLEASE BE CAREFUL!! Don’t swim alone, Don’t go near currents!! And there is definitely a strong current undearneath the surface. Be aware of your surroundings. I was thankful enough to survive that, i know there has been a couple deaths of people being trapped underwater within the boulders. So please, be cautious!