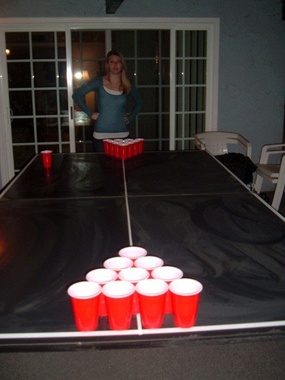 Beer Pong is a drinking game popular in most college towns, including Chico. It seems that the specific rules of the game vary depending on where you are playing and with whom, but the general rules of the game are as follows: Plastic cups are partially filled with (generally cheap) beer and set in a triangular pattern on each end of a rectangular table. Two teams play against one another by throwing a ping-pong ball into the opposing side's cups. When the ball lands in a cup, the other team must drink the beer contained in it. The winning team is the one that makes the other team drink all the beers on their side. Upon losing, the winning team's beers must also be drunk by the losing team.

Often times on an early morning after beer pong games have taken place, red plastic cups can be seen strewn about on the lawns in the South Campus Neighborhood as evidence of the previous night's play.