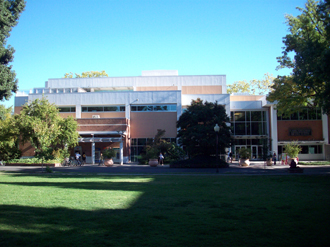 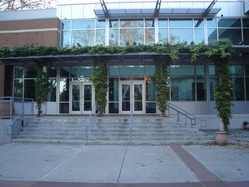 The Bell "Memorial Union","39.728004","-121.844983" (usually referred to as simply the BMU) is the student owned student union building administered by Associated Students, Chico. The BMU is under the original authority of the AS BMU Committee. The building was named after Hugh McKee Bell.

The BMU houses many of the programs and services supported by Associated Students, including the student government, Marketplace Cafe, and the AS Bookstore, It also has the largest auditorium venue in Chico, which hosts campus events as well as events for the wider community. In addition, the university information center is housed in the BMU. ATMs of several banks are available on the exterior of the building.

In 2001, a major BMU Expansion of the BMU was completed. At the time the expansion was approved by the students at the ballot, the proposed expansion was projected to cost about $16 million. By the time of its completion, it cost $36 million.

Interestingly, the entire building is student owned and consists entirely of AS subunits with one exception. The Student Activities Office is the only non-AS entity in the building.

Places in the BMU