In 1997, Bicycle magazine named Chico as America's Best Bike Town. Later in 2007, Chico won the Bronze Award from The League of American Bicyclists1. Chico is also home to The Bidwell Bump™ Mountain Bike Race event held in late summer in Upper Bidwell Park and the Chico Wildflower Century road bike race held in late Spring as well as the Chico Fallflower Century race held in October — confirming, without a doubt, that this town is prime bicycler territory. 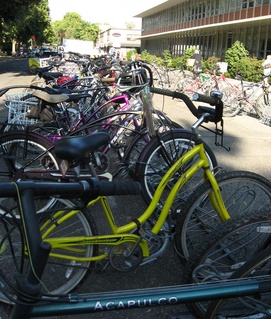 Bikes are a very important part of Chico. CSU Chico bike rack. The City of Chico, with its Bicycle Advisory Committee (chaired by Ed McLaughlin) and Bicycle Plan, has worked diligently to make bicycling a safe alternative to driving. The city has a full array of bike lanes, including lanes for making left turns at some major intersections. Chico Velo is the city's premier bicycling enthusiast club and has been an important factor in these accomplishments. The organization has a full array of literature on bicycling in and around Chico. Not all efforts have met with success, however. In 1996, a group of Chico High School students attempted to institute a program where anybody could borrow a bike for free. This was called the Yellow Bike Program. It did not last. However, residents of Chico now widely participate in Bike Commute Month.

A number of bike taxis, or pedicabs, operate downtown, typically in the warmer months.

Visit the Bicycle Rides page for information regarding Mountain Bike trails and events as well as Road Bike rides in the Chico area.

This content will likely be moved to its own page soon.

The City of Chico has resource for bicyclists at the Bicycle Advisory Committee website that includes the bike plan, maps, safety tips, and a link to relevant laws.

There are several classes of bike paths in Chico, as designated by Butte Regional Transit.

Bike paths, lanes, routes, and connectors in the Chico area, along with bike trails through Upper and Lower Bidwell park are marked on the Chico Bike Map.

A bike tunnel (Class I) is being constructed at Pine and Cypress streets to allow free flow of bicyclers to Bidwell Park without having to cross vehicular traffic. It connects Annie's Glen to Bidwell Park. It is the first of its kind in Chico (to this editor's knowledge).

There are some intersections in Chico with bike-accessible signal buttons:

See Bicycle Hazards — if you're thinking about editing for the first time, writing a discussion on the bollards and where they are would be a great start. Always watch for potholes, drain gates, and oil/sand/gravel on the road. If a bad dog is encountered feel free to kick it, or use more force to teach the cur a lesson. Pit bulls are especially dangerous. and watch out for those vicious chihuahuas also. What's a bollard? A song played on a bowling ball?

Chico is is also home to bicycle frame builders and component manufacturers.