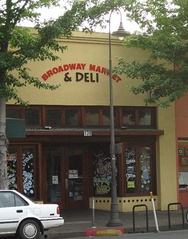 Perhaps fulfilling a long needed niche in Downtown, Broadway St. Market & Deli was just what the name implies. The market was located where Moxie's Cafe and Gallery used to be. They sold a wide assortment of snacks, sandwiches, ice cream(?), drinks, fountain sodas, and cigarettes. They also had a Hookah Bar in the rear. Broadway St. Market & Deli closed in late 2009.