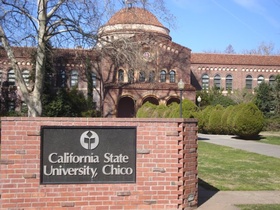 Big Chico Creek, that was once a home to a family of beavers at the university, divides the campus in two. The campus is also at the forefront of sustainability.

Chico State is considered one of the most haunted universities in California, with numerous sightings of ghosts, spirits, and the Chico Chupacabra.

In addition, to the seven colleges, there are also six professional Schools. These are also administrative units each under the direction of a director.

Chico State is bisected by Big Chico Creek and sits more or less centrally within the city of Chico. It is bounded by Highway 32/Nord Avenue to the west, The Esplanade to the east, West 2nd Street to the south, and finally West Sacramento Avenue to the north.

Chico State is easily accessible from Highway 99 and Highway 32 (from Interstate 5).

If you are traveling north on Highway 99, take exit 385 towards Chester/Orland. You'll need to cross the first intersection, then immediately merge to the left and take a left to head west on Highway 32. Continue past Main Street and Broadway Street (barely south of Downtown). Just two blocks ahead is Normal Avenue (just after Salem St.), where you may turn right. Drive down the road until it ends at W. 2nd St., and Chico State will be in front of you. Now you'll just have to find a place to park.

2008-10-08 14:08:59   Hmmmm. This is good quiz question. My guesses for a classroom with a fireplace are: Trinity Hall 120. It's the room that is now called the Humanities Center. It used to be the Chico State College library and also the first student owned bookstore. In that case it is no longer there. Is that where you had in mind? Other than that you would have to go back the the Bidwell Mansion for a classroom with a fireplace... Unless you are talking about the Art Department's Sculpture Lab or the Ceramics Lab or something like that. —GregBard