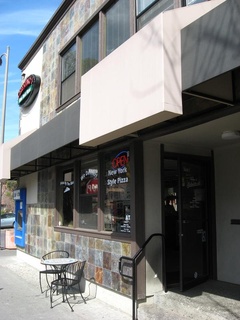 Celestino's is a pizza restaurant in the 101 Salem building at First and Salem in downtown. It definitely fits into the category of Cheap Eats, especially for downtown. For very little cash you can get a lot of pizza! They have lunch specials, which are popular with both Chico State students as well as those from nearby Chico High School. In addition, a very popular option is a slice of pie and a glass of beer at a very reasonable price.

The pizza is New York style with extremely thin crust. You can buy by the slice or a whole pie, depending on your hunger level and needs. The pizza by the slice at Celestino's is made piping hot by being thrown back into the oven for a few moments — most pizza places don't bother. They have over a dozen specialty pizzas. Perhaps their most popular is the God Father, which includes fresh and sun-dried tomatoes, dabs of pesto, and ricotta right on the crust just below the mozzarella. In addition to pizza, there is pasta and other Italian fare such as calzones, although this place is much more known for their pizza.

Celestino's has a sister restaurant with the same owner in the Safeway shopping center on East Avenue (across from Pleasant Valley High School) known as Celestino's Pasta & Pizza. Celestino Gencarelli is also the owner of the newly established Crush 201 restaurant in downtown.

2008-09-13 17:48:59   Prices increased recently (say, around August) per slice. They're about 25 cents more. So it's $5.50 for two slices of non-specialty pizza as of this comment. Does this still qualify as a cheap eat? I suppose a meal under $6 still qualifies, but I was certainly a little disappointed. So last time I went I opted for a single slice of The God Father instead and had a salad back home. —RyanMikulovsky