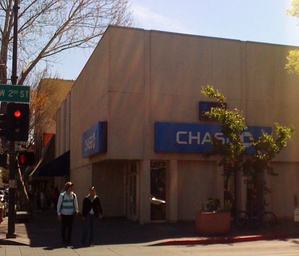 Chase Bank is a bank with two locations in Chico. The downtown location is at Second and Broadway, while the North Chico location is in the North Valley Plaza. There are also a Chase cash dispenser atms inside of Target and the CVS Pharmacy at 1496 East Avenue.

These two locations were formerly Washington Mutual branches. WaMu was bought by JPMorgan Chase and all California branches were renamed to Chase Bank by March 30, 2009.

Chase Bank finally switched all former Washington Mutual accounts to the Chase computer system on October 25, 2009. WaMu Free Checking was renamed to Chase Free Extra Checking and was eventually eliminated in February of 2011. WaMu Online Savings accounts were converted to Chase Plus Savings accounts with the monthly fee waived at this time.

The End of Free Checking for Former WaMu Customers

As of February 8, 2011 there is now a $10 monthly fee for this account. Additional account fees also were added to these accounts starting on February 5, 2011.

In order to avoid the monthly fee a customer must keep a minimum balance of $1,500 or have direct deposits totaling $500 or more each month (payroll, pension, or government benefit). The fee can also be waived if a customer has a balance of $5,000 or more in qualifying deposit or investment accounts linked to the checking account or if the customer has paid other Chase checking related fees of at least $25 per month.

Fees will be charged for money orders, cashier's checks(counter checks), and traveler's checks.

Chase offers a Free Chase College Checking account for new customers who are students. However, this account is only good for 5 years or as long as the student is currently enrolled.