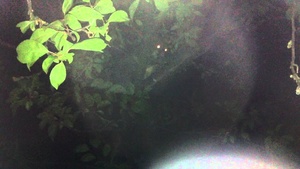 Alleged photo of the Chico Chupacabra, taken in April 1996

The Chico Chupacabra is a beast reported to have been seen on the campus of California State University, Chico and the surrounding area. Reports of the creature first surfaced in 1978, when students notified University Police that they had heard snarling and ruslting noises in bushes around campus and in dimly-lit areas. Over the last forty years, seventeen sightings of the Chico Chupacabra have been reported to the University Police Department and the Chico Police Department.

The creature has been described as being roughly four and a half feet long with matted brown and red fur. In one police report, a student described the creature as a dog-like beast with large claws and crooked teeth, and it growls and snarls much like a bear. Another report came from a student whose dog was attacked in lower park by an unidentifiable animal in early 2008. The most popular sightings occur around Kendall Hall and Laxson Auditorium, leading many to believe this creature lives in the tunnels beneath the University.

Many have speculated as to what the Chico Chupacabra may actually be. Some propose that Chico's stray dog population has grown in the past few decades, making for more disturbances on campus. Others speculate that this is a student causing havoc in the community, but this does not add up, considering that these sightings have been reported for almost four decades. One probable explanation is the growing transient population who may sleep in bushes or dark areas around campus and in the community. Nonetheless, some students and locals choose to believe in the Chico Chupacabra and keep a wary eye about them when exploring the Chico area at night. 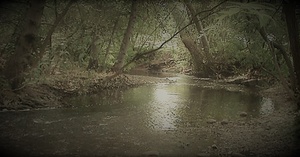 Big Chico Creek, where numerous sightings have been reported.

The Chico Chupacabra has gained quite a bit of notoriety around the town and on campus, with students and faculty often jeering on the subject. The University Faculty have even released comments on the Chupacabra in official University announcements. Statements like this one from 2015 and this one from the following year briefly mention the Chupacabra in lists at the bottom of the page, poking fun at this urban legend. Students have also been seen around campus wearing shirts with images of the Chupacabra, or as they call it, the "Chicocabra". While some embrace this quirky part of Chico's culture, others still live in fear of the dreaded beast.