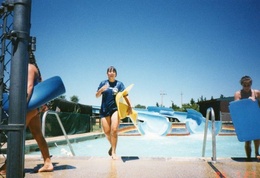 Summer of 1995, just before Fun World closed, at the bottom of the big slides

Chico Fun World (also known as "Fun World USA") was a small amusement park that was once located in Chico. This was the place for summertime birthday parties for kids, as they boasted a wide range of family friendly activities. They had two large water slides, swimming pools, batting cages, a miniature golf course, bumper boats, an arcade, and more. Any local kid who was around in the 1980s and early 90s will certainly remember begging their parents for the unlimited slide wristband.

Although quite successful in the early years, Chico Fun World went into disrepair and many complained about the upkeep. There were supposedly many complaints made to the city about safety and cleanliness concerns. The park closed in 1995, after being unable to repay fines and keep the electricity on. The park sat vacant for years, with the pools and slides falling into disrepair. As recently as the early 2000s, a drive down Fair Street or Whitman Avenue (now Martin Luther King Jr. Parkway) would offer a nostalgic view of the old slide structure. It became hazardous when small fires were sparked at the site, and the buildings and slides eventually had to be demolished. Sierra Nevada Brewery bought the property in 2001, as it is adjacent to their own facilities.

2009-04-25 16:50:21   Does anyone have pics from Fun World? Mini golf, bumper boats, etc? Especially looking up at the big slides? I will be going to my mom's house soon to look through her old pics to see if she has anything lying around that I can scan. I think this page would really benefit from some more pics since anyone who is new to the area (post 1995) would have no idea what it was like. —StaceyEllis

bumper boats, etc? Especially looking up at the big slides? I will be going

lying around that I can scan. I think this page would really benefit from some more pics since anyone who is new to the area

SORRY to say ive spent many hours looking for pictures of my childhood playground and this site had one of thee best >.> Miss that place if only i had the backing id rebuild a similar place in chico HUGE money to be had :( —24.23.53.228

2012-08-27 01:55:04   I have memories of Fun world. To me it was almost like Disneyland in Chico. I wanted to go there a lot but we didn't have much money. I remember watching people play Outrun for hours in the arcade. I'd go do the water slide about four times then walk into the arcade almost soaked with a towel. I couldn't make up my mind. I loved the music in that game to. I remember one day when I was there I could hear Gloria Estefan at a concert singing Conga at the amphitheatre in the fair grounds and go down the water slides at the same time. I loved living in Chico as a kid. I remember walking around the Chico mall foundating before it was built to steal nails and wood to build forts in my back yard at home! —64.118.114.82