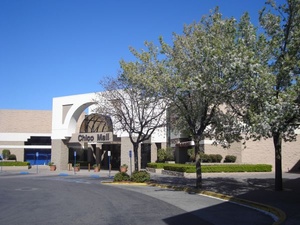 One of the main entrances to the Chico Mall, between JC Penney and Forever 21

The Chico Mall is often still called the "New Mall" by long-time residents despite the fact that it has been a part of the Chico landscape for nearly twenty years (it's counterpart the "Old Mall" being the North Valley Plaza shopping center, which was once a fully enclosed mall with department stores and food venues). The Chico Mall is now the only "mall" in town in the truest sense of the word.

The mall itself has three "anchor stores" located within: Sears, Forever 21 (was Gottschalks), and JC Penney. It was once home to a fourth anchor store Troutman's, which went out of business in 2003 and whose place in the mall is currently occupied by Dick's Sporting Goods. The mall has everything from bath & body type stores to jewelery to electronics. There is also a food court near Penney's and some restaurants located outside of the confines of the mall but within the same parking lot.

There is talk of changing the structure of the mall when Furniture Depot goes out of business. The proposed plan would involve the old Troutman's portion of the mall being razed, and a new wing to be built parallel to the highway. This plan is still in early stages and has not been implemented or approved yet.

The food court used to have a carousel under the dome skylight but it was not very popular. Cinnabon took over, built a restaurant, and relatively promptly went out of business. Burger King also left the mall.

Although Chico is only a moderately sized city, the Chico Mall and other shopping areas in South Chico get quite congested during the holidays. The southbound 20th Street exit of Highway 99 has been known to get backed up onto the highway, causing traffic headaches.

2011-09-15 23:23:26   Will someone please do a virtual tour of this mall including the two story Jc Penny? I lived in Chico and Paradise California when I was like 6 or so which Dad worked at Pay Less up there: but Mom and me rode the bus all the way down to Chico Mall for the day and that was the very first time I rode the bus.

Often Mom would go down alone which Dad and I would pick her up after he comes home from work doing a night trip over there and if needed to we would also do any other errands.

The Chico mall was built like a year after I was born which I was born in 1986. My parents remember when Chico Mall was a big empty field. Before we moved to Paradise Dad worked in Orland at a pharmacy and my parents knew the mall was going to be there before anybody else did! LOl.

The JC Pennys was added much later in the middle 90s and it was my second place I ever rode on escalators which my first place was Arden Fair Mall in Sacramento. —76.14.196.115