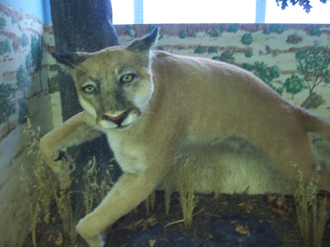 The original Wildcat still with us on the second floor of Holt Hall.

The Chico State Wildcats is the name of the sports teams at Chico State. They are named after the original Wildcat which can still be seen on the second floor of Holt Hall. The Wildcats compete in NCAA Division II in the California Collegiate Athletic Association. See also Chico State Athletic Hall of Fame See also Recreational Sports.