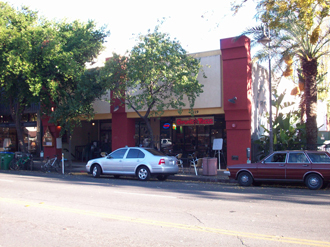 They are open late Friday and Saturday until 2:30am. In 2009 they began offering summer beer specials where a pint of Sierra Nevada could be had for $1.75.

2008-06-26 12:37:40   Yeah, I've heard from at least one person (and I agree) that their vegetarian options are really confusing. Enough for me to just avoid them and keep going to Aca Taco or Tacos de Acapulco. How a southern California-based franchise can mess up the vegetarian menu is beyond me. Well, maybe one day I'll try them out and find out for certain. —RyanMikulovsky

2008-06-29 14:53:19   They make the food to order, so you do have to tell them what you want. Almost all of their items have a vegetarian option. Pick the vegetarian option and design the meal the way you want it. You can ask them for suggestions. The staff is friendly and the place is clean. It has a beach theme. —Danielcyr

2008-08-22 21:37:53   Delicious tacos, bad service. I went in on a Friday night and there were a dozen people in line with two out of three of the guys looking unsure what to do and waiting while the first guy took an order. Then, after waiting fifteen minutes, they started helping some guy four spots behind me.

A lack of staffing I can understand, and part of the appeal may be that the staff don't behave like fast food employees. But it really felt like they should be more on top of their stuff. —GeoffJohnson

2010-05-30 20:50:41   Actually it would be the fourth Southern California based restaurant coming into downtown... our beloved Woodstock Pizza is based in San Diego, and Pita Pit started there. At least we get something back for all our water. I absolutely love Chronic Tacos. The name really doesn't sound appetizing to me, but I'm never let down. My favorite is the Tecate beer battered fish tacos. The fish is battered per order, they don't use frozen fish sticks like the other places I've been to in Chico. Also, they have a baja fish sauce that my whole family is addicted to!! —99.0.46.46