Unable to include departed business 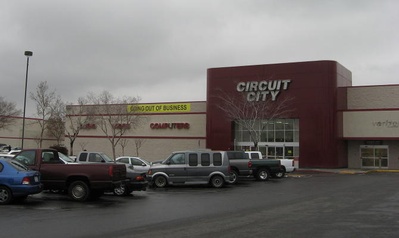 Circuit City was an electronics store in South Chico. In late 2008, Circuit City announced that it would go out of business. Many experts cited increased competition with Best Buy, Amazon, and bad management practices as leading to the chain's downfall. The store closed its doors early March, 2009.

We have been doing there since the 90s and every time we've gone in there was always someone asking if we needed any help when Dad was looking for something.

This is where Dad first thought of the idea for a TV to PC connection and I do not mean Web TV either as that is it's own enitiy. I am talking about a TV that actually allows your computer screen to be displayed on the big TV so whatever you do on the computer will be shown on the TV and nobody had any idea what Dad was talking about till the good year 2005 when we bought a SamS ung that was the size of a boat which took 2 strong men to carry. (It was no easy task I tell you!) then a year later after we bought it the kind of PC-TV Dad wanted came out and we felt so cheated by fate. Now we have a Westing House which has *okay* quality sound but the PC connection is flawless. You can see both screens at once while the other TV's liked that (Boat) TV you had to *set it* manually to display *Duel Mode* or *Native Mode* where you slide the PC screen over to the TV. There was a reason we never used *Duel Mode* on the older TV's but I cannot remember why.

The WestingHouse TV however was all ready to set to display your PC without fiddling with your computer.