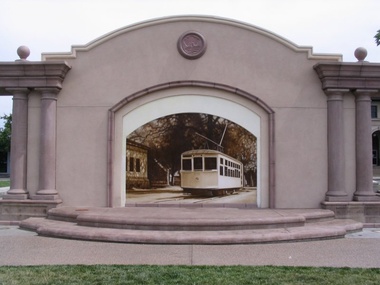 In 1872, General John Bidwell donated the land for City Plaza to the city after Oroville was designated as the county seat instead of Chico. Up to that time, Bidwell, had been reserving this land for a courthouse, and the land that is now Bidwell Park, for county offices. Since then, the City Plaza has been the place for community activities and special events. Originally it was a grassy square with many shade trees that had been planted by John Bidwell. It was redeveloped around 2005 and now has an abundance of concrete.

Central to the modern plaza is a very popular fountain where adults and kids alike cool down during hot summers. Additionally, the plaza has a stage at its northern end and a sepia-toned mural painted by William EverOne called The Esplanade on an outside wall of a public restroom facility opposite of it. William is currently painting another mural on the other side of the building. 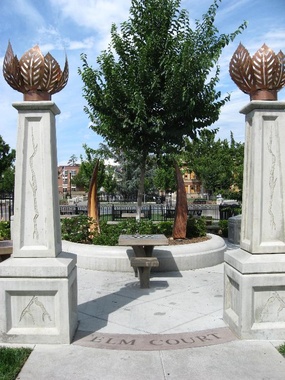 Elm Court's Fred and Ginger by Owen Gabbert and Peter Piatt. The chess tables are by Elizabath Devereaux. There are several artistic structures which have been added to the park. The 'dancing' twin spires located in the Elm Court are Fred and Ginger. The figures were commissioned by the City of Chico Redevelopment Agency for the Heritage Elm Sculpture Project. The artists Owen Gabbert and Peter Piatt completed it in January 2008. 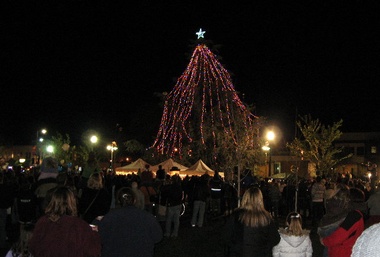 Holiday Tree Lighting with around 3,300 LEDs. Out of the scene, there is a menorah above the mural.

There is plenty of entertainment at the City Plaza. During the Thursday Night Farmer's Market, entertainers take to the stage. The next evening, Friday, free concerts are held from May to the end of September. Additionally, Shakespeare in the Park is held at the City Plaza free of charge during the summer. Donations are suggested, of course.

In addition to regular events, organizations around the city may reserve the park for their own events. The Chico Peace & Justice Center, for example, held a successful peace rally on March 18, 2007, that included several popular local artists and a speech by Mayor Andrew Holcombe. Quite often there are buskers and musicians entertaining City Plaza visitors.

As if entertainment and the fountains were not enough, the City of Chico provides free wireless Internet access throughout much of the park.

The park is opened to the public except during the hours of 2 a.m. to 5 a.m.. So while you cannot stay in the park, you can still travel through it. 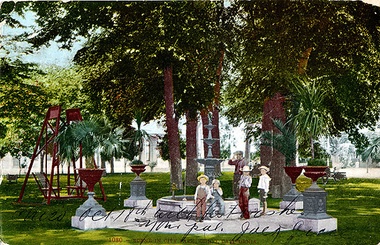 Colorized postcard 1908 "Scene in City Park" In its current state, the City Plaza was finished by late 2007 after 2 years of planning and constructions. Originally the site had over 200 shady trees, most of which were planted by John Bidwell. However, they became diseased and were quickly deteriorating. Quite famously, a branch fell and injured a casual visitor in 2003 (urban legend?), which set in motion its redevelopment. The trees, simply, had to be removed. Thus, it was the perfect opportunity to revitalize the area with a fresh design that would end up costing the city over 4.1 million dollars, paid for by a Redevelopment Agency bond. However, it did not happen without controversy. Soon the common thread in public discourse was the dismay over the building of a largely concrete park in a city known for its tree lined streets. But once the ribbon was cut on November 29th, objections nearly vanished. So everyone seems to be enjoying very much its capacity to serve as a venue for all sorts of events.

2008-10-08 22:34:24   The fountain is a really great place. Fountain hopping is always a fun activity, as long as you don't mind the drunks or the homeless, something you deal with a lot in Chico. — fountain-hopper
Edit tags
Cancel
Nearby LocalWiki regions: Oroville Orland, CA Yuba-Sutter Nevada County Anderson California Redding