The Climate in Chico is one of its defining characteristics. One will often hear locals complaining about the lack of seasons when things start warming up for the summer, saying that things skipped right over spring. That's not really true, as Chico does have four well-defined seasons. See Weather for information on current conditions in Chico. The explanation for changes in weather is derived from Scot Hoiland's California Geography lecture at Butte College. 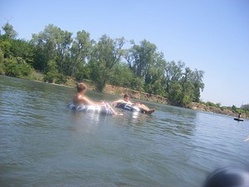 Tubing in the Sacramento River Chico is in the Central Valley, where the climate is Mediterranean in nature. This means that Chico is subject to hot summers and wet, cold winters. During the summer. the sun warms the higher latitudes more thoroughly, allowing the Hawaiian High in the Pacific to stay well north. This air mass dominates and prevents the northernly Aleutian low from sweeping into California. But this heat is moderated by a stream of cold water, the California Current, along the coastline. It originates from the Gulf of Alaska. So summers are hot, but not extremely so. The climate is also rarely humid, with few winds at night which can make sleeping without air conditioning difficult, so fans are a must! On occasion, thunderstorms pass through during the night. Daytime temperatures tend to range from 90-100 degrees (and more!), while at night temperatures may drop into the 60s. Record high temperatures for the summer in Chico are well above 110, with an all-time recorded high of 117 in July of 1972! Such high temperatures can create a high potential for wildfires east of Chico. Temperatures tend to reduce by mid-September. 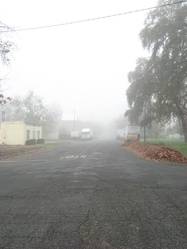 Radiation fog in Fall 2008 The fall is very comfortable with temperatures in the 70s to low 90s, with few showers. During this time, the Hawaiian High is slowly moving south as the earth's northern hemisphere tilts away from the sun. Summer-like temperatures can often last right into the fall, with t-shirt being in season well into October and November some years. Some would argue this is one of Chico's more beautiful seasons, as the leaves turn orange and the temperatures become more manageable. Visits to Bidwell Park are a must during this time! 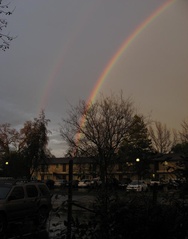 A late afternoon primary and secondary rainbow in Chico, CA The winter begins the rainy season in Chico, although it doesn't get quite as rainy as nearby Paradise. This rain comes in from cyclonic storms that originate at the Polar Front, where the Hawaiian High and the Aleutian Low meet. The Hawaiian High is now generally well south of Northern California and allows the influence of the arctic airmass to dominate. These storms move west to east. Rainfall averages about 25.75" a year, most of which falls in the winter and early spring. In contrast, Paradise receives about 55.55" annually. Winter temperatures rarely drop below freezing and tend to hover around the mid 30s and low to mid 50s during the day. Oroville and Paradise both have less of a potential for freezing as cooler air bypasses it for the valley in the evenings. This is why citrus is a commercial crop around Oroville but not around Chico. Fog can be a problem in Chico though it tends to burn off faster than areas closer to Sacramento and south of there. Record lows in Chico have been well below freezing (the lowest recorded temperature being a mere 11 in December of 1932!) but such extremes are rare. On December 17, 2008, temperatures dipped to about 23.5f at night. 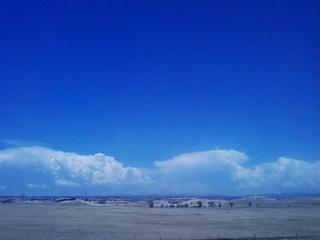 Thunderheads brewing over the Sierras and Cascades, looking east off Highway 99. Late May, 2009. The spring brings about mild temperatures in the 70s and 80s, slowly heating up into the 90s for summer. This is the transitioning of the winter's dominating Aleutian Low to the Hawaiian High. During the later spring months due to unstable air, towering thunderheads begin to brew over the Cascades and the Sierras. Periodically their violence can be heard in Chico. It can be rather spooky at first when you look up and see nothing but blue sky. But inevitably, just over the foothills, one can see just where the crashes came from. Sometime these storms can pass through Chico, but they do so very quickly, especially during the Summer as mentioned above.