The Craig Fire was a wildfire that burned east of Oroville. It started August 3, and was brought into full containment on August 10. According to the Cal Fire report, the fire burned 2001 acres and destroyed one residence and one outbuilding. 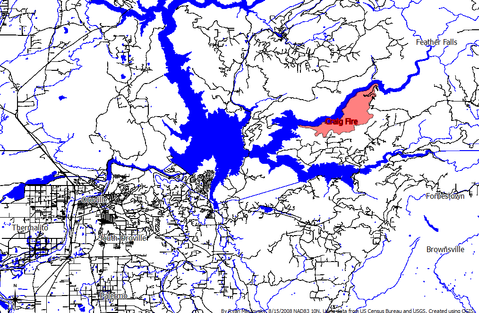 The final perimeter of the Craig Fire (pink area). By Ryan Mikulovsky using data from the US Census Bureau and USGS . Created using QGIS.

Cal Fire reports state that the Craig Fire started the afternoon of August 3 near Lake Oroville.

According to a Chico ER article 1 immediate threat evacuations were issued for Kanaka Ranch Road and Onyett Road west of Lumpkin Road. As many as 50 structures in the area are currently threatened by the fire.

An emergency shelter has been set up at the Nazarene Church in Oroville (2238 Monte Vista Avenue).

An update at 7:45 by Cal Fire moved the expected containment date to August 10, reduced the containment to 20% and increased the number of threatened structures to 75. In addition, they are reporting that one residence and one outbuilding have been destroyed.

Cal Fire is reporting similar conditions as of afternoon: the fire is 20% contained, full containment is still expected August 10. No more structures have been destroyed (still one residence and one outbuilding) and 75 structures are still threatened. At latest report (12:45 pm) 2500 acres have burned.

Precautionary evacuations (see below) have been issued for the area; immediate threat evacuations are still underway.

An update from Cal Fire at 6:45 pm indicates that the fire is now 50% contained. Other info remains the same, including estimated date of containment.

The Cal Fire report from 7:00 pm shows that very little has changed in the last 24 hours. Currently 2500 acres have burned with one residence and one outbuilding destroyed. The fire did made a run early Thursday2 and a spot fire developed in the afternoon but it was quickly contained. 75 residences remain threatened, and the fire is still 50% contained. The closure of Lumpkin Road remains in effect, but residents of the precautionary evacuation area will be allowed through with proper identification.

According to Cal Fire's August 8, 2008, 8am (that's a lot of eights) report, 1441 personnel continue to make progress on the Craig Fire. The report also noted that the fire continues to move "north and northeast towards the middle fork of the Feather River." Evacuations and road closures remain the same.

The newest update from Cal Fire at 7:00 am states that the fire is now 75% contained and full containment is still anticipated for tomorrow (August 10). Interestingly, they have reduced the acreage that are being reported as burned, which is now stated to be 2001 acres. All road closures and evacuations remain the same.

At 10am, CalFire reported that the Craig Fire was 95% contained and had burned 2001 acres. They are expecting containment today. The night before the State agency removed all evacuation orders, though Lumpkin Road will remain closed to through "truck" traffic until 8am, August 11th. Up to this point, the fire cost tax payers $8.8 million and it had 1365 assigned personnel.

The 7:00 am Cal Fire update states that the fire is 100% contained! There are still some mop up and repair efforts, but demobilization is under way.

According to CalFire, All evacuations were rescinded August 9th, at 6pm

The following areas were under immediate threat evacuations during the Craig Fire.

The following areas were under precautionary evacuations:

An evacuation shelter has been set up at the Nazarene Church in Oroville. It is located at 2238 Monte Vista Avenue.

There is currently no shelter for animals in the evacuation area. Evacuees are encouraged to board animals with friends. If this is not possible, the SPCA in Oroville will be able to accept some small animals (no large animals), but only until 8:30 pm. Large animal evacuations will be assisted by Butte County Animal Control (538-7409), but not after dark. Again, there is no facility for boarding them, so the evacuation assistance will only help you get them out but will not have a place for them to stay.

Other Information and Resources

Butte County has posted information for fire victims on their website. This includes general information about area fires as well as help with what to do after the fire when you return home.

All road closures have been lifted