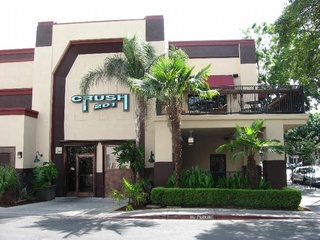 Crush (formerly Crush 201) is Celestino's latest restaurant incarnation — but his first entry into fine dining. For several weeks a banner hung on the old Bank of America building's second floor, asking the citizens of Chico to name an upcoming restaurant using a website. It is unclear if citizens helped name downtown's latest addition.

Crush 201 changed its name to Crush, on account of a trademark infringement with a Roseville restaurant named Crush28.

2008-07-01 13:48:55   I went there for drinks and appetizers, and found it to be on the upper end of typical $$ for Chico meals. Food was yummy and the drinks were perfect. We shared some of the bread sticks with Marinara sauce and there was more than enough for two people. I would love to go back. —annsteckel

2009-04-13 11:25:19   Meat market crowd? Just seems like it, tried to go there once just to see what the big deal was, no food is worth waiting an hour for, especially pasta which is so easy to make at home and for 1/4 the price. Am I wrong or is this also a big wine drinking location where people go to attempt to validate their intelligence and worth to others by displaying their knowledge of wine?