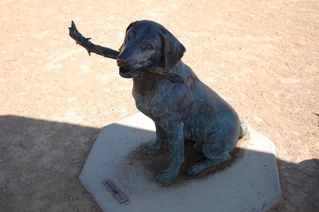 Degarmo Park (also Degarmo Community Park) opened August 23rd, 2008, with a leash-cutting ceremony. It is the first park managed by CARD to have an unleashed dog area. Degarmo Park is not yet completed as it has seven phases of development and only one has been completed. The park is currently in its second phase where soccer fields will be developed as well as possibly a playground. Disc golf is also slated to make an appearance.

Those that want to let their dogs run amok must abide by Dog Park Rules found at the CARD website. There were initially some complaints made by dog owners that the rules were too restrictive. For example, children under 7 are explicitly not allowed in the unleashed area of the park. Those complaints largely went away with time.