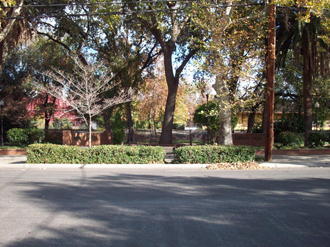 Depot Park is a neighborhood park in the South Campus Neighborhood at West Fourth Street and Cedar Street. This park is widely known to be a popular place for vagrants and "bums" to kick it. They have unfortunately been known to drink, smoke meth, and fight at this park. If they get out of hand the kids from the apartments across the street have been known to "roll on them". Thus, Depot Park has an interesting distinction of being a place where the law isn't always followed. The L supposedly runs Fourth and Cedar.

Food Not Bombs often has meals at this park.