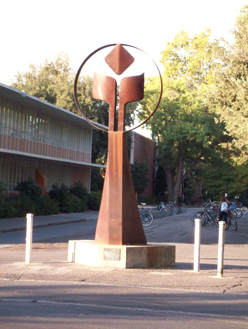 First and Salem is an intersection in downtown where Salem Street meets West First Street. It is notable for the fact that it is the terminus of the First Street Closure. The University Flame marks a gateway to the Chico State campus and the Greek Columns mural is prominently visible on the side of Taylor Hall. On the southeastern corner, the 101 Salem building features Celestino's Live From New York and the Greek Heads Pedestals. On the northern side of the street is Ayres Hall with one of the Corner Plaques marking the original boundary of the campus in front.