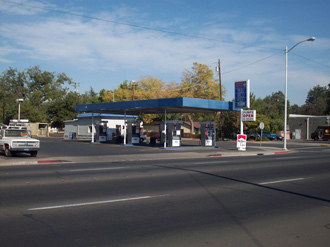 There are fewer gas stations in Chico then there used to be, and they are not always located in the most convenient places.

Ever since Costco opened its gas station, they have done what they needed to do to ensure that they are always the cheapest gas in town for their members. Beyond this solid first place the field fluctuates. There are a few reliably cheap stations like am/pm on 20th which while reliably low, seldom becomes the cheapest after Costco. There are others such as Beacon on Fair, or Beacon at East and 99 which you need to keep an eye on, because at any time they could be the cheapest in town, but in the intervening time they rank among the rest of the field.

One thing that you can rely on pretty much no matter what: All Chevrons in town are always at least 10 cents more expensive than whoever is the cheapest in town and usually are the single most expensive stations in town. Shell is almost always close behind the Chevrons. In fact, when gas hit $4, the Shell which had been at First and Mangrove became a Reliance because the owner wanted to be free from the high pricing (They now are at least a contender for the middle).

There is more to gas stations than the gas prices. There are usually small convenience stores with varying degrees of selection. There are also services such as free air which are provided in some and not others.