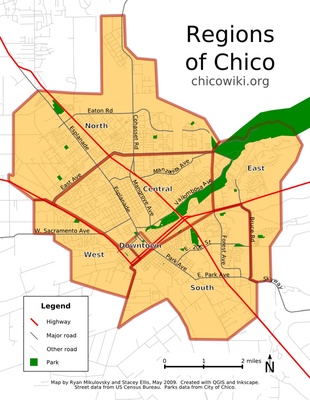 Regions of Chico by StaceyEllis and RyanMikulovsky. Map under development. Click map to enlarge. Chico is located at 39°44'24"N, 121°50'8"W (if you prefer the Public Land Survey System it's centered around Sec. 26, T.22N.-R1E., Mt. Diablo Meridian). The Chico Municipal Airport has an elevation of 238ft MSL. The Chico urban area occupies 27.8 square miles, according to the US Census Bureau. Also see Demographics, Geocaching, Geohashing, and Maps. If you're interested in the rocks around town or would like to know just where all those boulders came from on either side of Highway 99, see Geology.

Here are some distances from other major California cities:

Chico is generally divided into several vaguely defined areas. These are North Chico, South Chico, Central Chico, West Chico, East Chico and Downtown. Each has its own characteristics that make them distinctive, although drawing definitive lines among them can be difficult if not impossible. However, the map to the right has a set of suggested boundaries that editors can follow when trying to decide on what page listed above something belongs. The ZIP Code boundaries tend to roughly follow these vague boundaries although they played no conscious part in the aforementioned map.

The city of Chico is located within Butte County. It is in the northern Sacramento Valley, although some of the city does extend into the nearby foothills. There are several creeks that flow within Chico including Big Chico Creek, Little Chico Creek and Lindo Channel, all of which are tributaries of the Sacramento River. It lies between the Sierra Nevada Mountain Range and the Cascade Range.

According to the 2000 Census, Chico had a population of 59,954. Estimates of the population of the entire Greater Chico Area (including outlying areas) is thought to be well over 100,000. Although it is not the county seat, Chico does have the largest population of any city within Butte County. It also has several Neighborhoods such as Barber and Chapmantown. Nearby cities include Durham, Paradise and Oroville.