The geology in and around Chico is unusually diverse. Chico sits right at the beginning of the Cascade range and near the end of the Sierra Nevadas. Sierra Nevada.  Within a short distance, you can see all sorts of interesting formations. 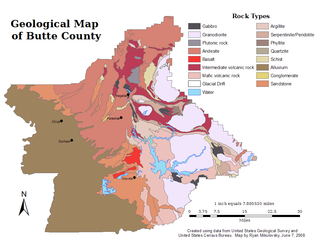 A Very Generalized Geologic Map of Butte County by RyanMikulovsky using data from US Geological Survey and US Census Bureau. See below for PDF.

Someone driving north towards Chico on Highway 99 may be struck by the number and size of boulders strewn about. To the sharp observer, they appear to occur in strips, alternating between zones of rocks and grassland. Why?

These strips are part of the Tuscan Formation, which were formed approximately 2-4 million years ago1 by successive volcanic mud flows or lahars. Lahars typically occur when a volcano erupts causing snow to melt. This mud flow accumulates volcanic rocks along the way, eventually depositing onto the valley floor (typically following river valleys). The mud then hardens around the even harder volcanic (igneous) rocks. Over a very long span of time, the hardened mud is weathered away, leaving behind those rocks — this is a concept known as differential weathering. Thus, the boulders you see on the way towards Chico used to be part of a much larger solid mass. So if you've ever heard that a volcano (such as Mount Lassen) ejected all those boulders, now you know the truth. In fact, the size of those freed boulders make it highly improbable as an outlandishly large force would be required over such distances. And if that were the case, wouldn't the boulders be scattered everywhere and not along roughly parallel strips?

Earlier it was mentioned that lahars tend to follow river valleys. This is quite true of the flows that flank Chico. If you have ever explored a butte or the formations at Upper Bidwell Park, you may well notice alternating layers. There are layers of smooth rounded rocks (conglomerate) and solid mud with sharp, angular volcanic clasts (breccia). Most people know that river rocks are round and quite smooth. Thus, just by using a bit of common sense, one can conclude that the lahars did flow in river valleys — repeatedly.

It should be noted that Chico gets most (if not all) of its water from the lower portion of the Tuscan formation. Remember that it consists of layers, where the lower most layers are sandstone. Sandstone is quite porous and as such is perfect for storing water. This is why the Neal Road Landfill must use intricate methods to prevent toxins from infiltrating into the groundwater. Hydrologists (and geologists) must continuously monitor the quality of ground water around the landfill.