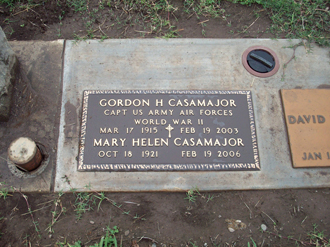 Gordon Casamajor (b. March 17, 1915 - d. Feb 19, 2003) was a member of the Chico City Council and served as mayor for two terms. He was an Air Force veteran of WWII before settling in Chico. He was a longtime local resident, opened a hardware store downtown, and later became an insurance agent.1 He is buried at the Chico Cemetery.