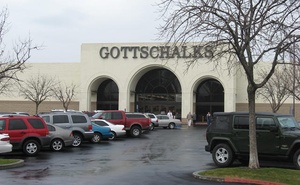 Gottschalks, founded in 1904, was a small chain of department stores that was founded in Fresno, CA. Gottschalks was located between JC Penney and Sears at the new mall. They had more than sixty other stores in six western states and enjoyed a healthy presence in the central valley. Gottschalks was one of the first anchor stores to open in the new mall in 1988.

The usual department store offerings could be found at the local one-floor Gottschalks store: apparel for men, women, children, and juniors; shoes; housewares; jewelry; makeup and fragrances; and more. Like most department stores, they offered their own company charge card.

Going out of Business

Unfortunately, this regional chain went into bankruptcy January 14, 2009. They took several months to find buyers and had at least three interested, including a Chinese firm out of Shandong. On March 31st, 2009, Gottschalks declared that liquidator won the bid and they began liquidation sales and closing of the chain the first week of April.1

Over 5200 jobs will be lost with around 106 out of Chico. June 1st is currently the layoff date according to the State of California Employment Development Department. See http://www.sfgate.com/webdb/jobcuts/ for access to that Job Cut information.

Upon learning that Gottschalks will be closing, rumors started flying about which store will take over their spot in the mall. Just as with the closing of Troutman's, speculation has begun circulating that Macy's will be the next new mall occupant. Thus far, no evidence can point either way, but many in Chico have been wishfully thinking that the Chico Mall would see a Macy's someday. The rumor went nowhere when Troutman's closed (at the time, it was said that the income and market for Macy's just wasn't there), but only time will tell if it will come true this time around. The only real confirmed rumor has been regarding Forever 21. According to the Chico Enterprise, who got their information from the Fresno Bee, Forever 21 has bought the leases to a large number of what will be former Gottchalks locations, with plans to move in, if these purchases are OK'd by the judge presiding over the bankruptcy and liquidation of Gottchalks. The Chico ER story can be see "here" (at least until they stash it into a pay-per-article blackhole). 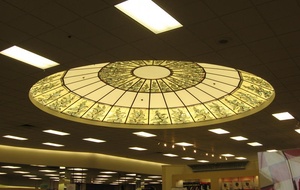 2009-03-31 07:22:39   Get ready for prices to rise and "sales" to begin. The same liquidator that did Circuit City will handle Gottschalks and if experience is any indicator, this liquidation will probably cost buyers more than regular day-to-day sales at the chain!! Sad day for employees and patrons of the New Mall. This closing could cause more trouble for the mall. —RyanMikulovsky

2009-05-26 13:06:38   Chico ER ran an article about the Gottchalks location. Apparently Forever 21 is looking very seriously into the current location of Gottchalks —JohnNash