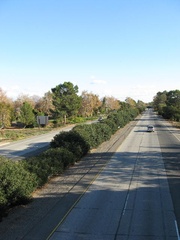 Highway 99 at the Cohasset Overpass California State Route 99, popularly known as Highway 99, is the main highway through Chico and the only freeway in town. Although there are alternative routes, it is the main way to get to the nearby communities of Oroville to the south (via Highway 149) and Red Bluff to the north. The freeway in its modern form was built in the 1960s, but the highway has existed in some form since well before then. Business 99 is the old highway prior to the building of the freeway, which can still be followed along the Esplanade and through downtown along Main and Broadway.

In early 2008, CalTrans began improving the ramps of the freeway. Generally these improvements consisted of smoothing the asphalt but plans include significant upgrades. For example, the north-bound off-ramp at East 1st Avenue will be widened, helping to alleviate daily backups that extend out into the freeway. Currently the off-ramp is one lane, and vehicles that need to make a right onto East First form an "unofficial" lane, blocking those needing to make a left. The widening is part of a larger plan to rework parts of East 1st Avenue from Neal Dow Avenue to Holben Avenue. If all goes well, construction should be completed by Fall of 2008.1.

The proposal to relocate Highway 99E through Chico, was the most single most important influence in the growth of the city of Chico. At the time it was a very controversial proposal. The California Highway Transportation System agreed to construct a causeway over Bidwell Park, and to beautify and improve The Esplanade which had been the old 99. The first section of the six mile stretch of freeway through Chico was dedicated September 24, 1963.2 The freeway was built during a time when Chico was much smaller in terms of population, and is often now seen as inadequate for current traffic volumes. The on-ramps are notoriously short within central Chico, which can lead to congestion during busy driving times. There are signs advising through traffic to use the left lanes to help alleviate this congestion and allow for easier merging for cars coming on to the highway, although this advice is not always heeded. The posted speedlimit is also less within the core of the city at 60 MPH instead of 65.

Better yet would be to use the same material on the road the British use where it only needs maintaining once every 10 years or so since they use a different material then asphalt which I cannot remember the name of and that material does not degrade very fast. —76.14.199.23