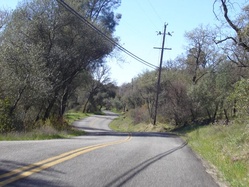 Honey Run Road as it curves to follow Butte Creek

Honey Run Road is a county road and has the distinction of having a covered bridge that crosses over Butte Creek. It isn't a road that you'd want to travel on regularly since it becomes quite narrow and windy towards Paradise, which has caused some grief for firefighters. There has been some talk by the Paradise City Council of closing the road down or turning part of it into a one-way road. It has a reputation of being a gateway to illegal activities.

The road begins off the Skyway, just east of South Chico and follows Butte Creek all the way to Paradise. It basically parallels The Skyway, but takes a much curvier route because it hugs the creek. Although there are very few places to legally park along the road, it is a popular route for those who wish to go tubing along Butte Creek. Be assured that on a hot summer day all of the legal parking spots (and many of the illegal ones) will be filled with the cars of those looking to take a float down the creek.

Just before 3pm on the 22nd of May 2007, a fire broke out north of The Skyway past Bruce Road. It may have begun along Honey Run Road near Horse Run Road. At around 5pm, the California Department of Forestry (CDF) began unleashing flame retardant upon the wildfire with fire-fighting configured tankers. By 7pm, up to 200 acres had been burned. The situation by 9pm allowed the Skyway to reopen to traffic heading down the ridge into Chico. At midnight, traffic was opened both ways. By 11am the next day, over 688 acres had been burned and Honey Run road was still closed.