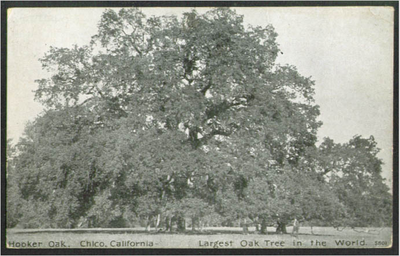 The Hooker Oak tree was considered at one time to be the largest valley oak in the world. It was named after the famous naturalist, Sir Joseph Dalton Hooker, who was a guest of the Bidwells. It was located in Bidwell Park near the current upper park entrance. Hooker Oak Park is named after the tree which stood in Chico for centuries, before falling to the ground on May 1, 1977.1 After it fell, it was discovered to not be a single tree, but two large trees that had grown together. Despite this fact, it was still a beautiful and amazing sight.

The tree was symbolic in Chico, and the stump can still be found at Hooker Oak Park. The gavel used by the mayor of Chico and the bench and pedal board of the Centennial Pipe Organ are made from wood from the Hooker Oak.

Pictures of the tree can be found all over Chico, as it is a big part of the town's history and identity. It was even featured in the Errol Flynn version of Robin Hood, much of which was filmed in Chico's Bidwell Park. 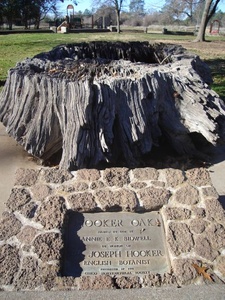