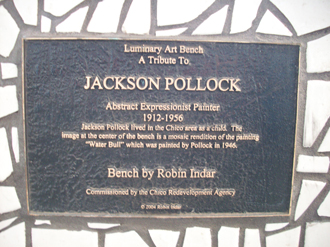 Jackson Pollock Luminary Art Bench is near Cycle Sport on West 2nd Street. The Luminary Art Bench's plaque says that Jackson Pollock lived from 1912-1956 and was an abstract expressionist painter. It further says that he lived in the Chico area as a child. Finally, it explains that "at the center of the bench is a mosaic rendition of the painting 'Water Bull' which was painted by Pollock in 1946." The bench is by Robin Indar