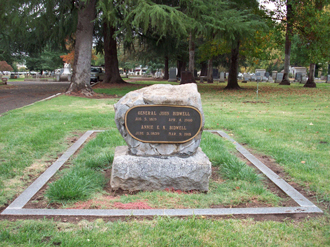 John Bidwell (August 5, 1819 – April 4, 1900) was a son of Abraham Bidwell and Clarissa Griggs. John Bidwell first arrived in California with the Bartleson-Bidwell party in November of 1841 and were one of the first set of families to cross the continent.1 He made his fortunes during the California Gold Rush, striking it rich at what is known as Bidwell's Bar at the Middle Fork Feather River. It is now entirely under Lake Oroville. He used this wealth to purchase land, including much of Chico. He married Annie Ellicott Kennedy Bidwell in Washington D.C. April 16, 1868. Some of the people present at their wedding included President Andrew Johnson and Generals Ulysses S. Grant and Tecumseh Sherman.2. He was an integral part of the history of Chico.