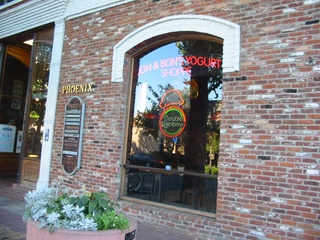 Jon & Bon's Yogurt Shoppe is a locally owned group of three ice cream and dessert shops. They have locations in various parts of Chico including downtown, Central Chico, and West Chico. Their first location in Chico was the West Sacramento Avenue location, although they started in nearby Oroville some decades ago. In addition to frozen yogurt, they have ice cream, smoothies, and shaved ice. Coupons for buy one get one free small yogurts can often be found in CN&R and other local newspapers.

The downtown location is especially popular during the Thursday Night Farmer's Market because of the proximity of the Phoenix Building to the market. It is also a popular hangout for teens in the evening, as it is one of the few establishments open late besides the bars.

2009-07-12 04:26:40   I would bet that the original poster is put off not because the establishment displays religious art, but because the art in question includes a) images of cute kittens alongside religious dialogue, and b) a drawing of a ten-story Jesus knocking on the window of a skyscraper. —98.248.199.96

2009-07-12 10:33:43   Yeah it's because its christian, not buddhist. After all, christians are the most oppressed religion, right? What baloney! — always playing the victim to the hilt. Even the mildest criticism is intolerance. Excuse me, the poster even complimented the yogurt despite the unprofessional display of religious art. That's actually called "tolerance."

The previous poster makes a good point about the content being primarily propaganda (kittens and such). Lincoln image is particularly egregious, as Lincoln was no proselytizer, favoring no particular denomination's beliefs over another's.

Yeah those poor christians! You're so oppressed, maybe you'll get a president elected someday too. Oh wait, they were all christians weren't they? You aren't a victim, get over it. —209.77.229.115

2009-07-12 11:05:58   Hello all. Thanks for your enthusiasm concerning user's rights to freedom of expression on this wiki (within limits; discussions should stay civil but not be libelous, inflammatory, hurt people etc). I hope that this enthusiasm will bring you all to other parts of the wiki just begging for your knowledge or reviews using the very same comments feature the above discussion used. Also consider establishing a user account. Thanks and have fun (but keep cool). —RyanMikulovsky

2010-03-30 22:15:43   Not to fan the flames, but the picture isn't just of a giant Jesus knocking on an ordinary skyscraper, but rather the United Nations building. So the image is horrific by both evoking the image of Jesus-zilla destroying heathens with sacred heart death beams, and suggesting that the UN (which contains many non christian nations and nations with a majority religion other than christianity) be run as a christian institution. Of the two scenarios, I personally think the rampaging monster Jesus one is less frightening. —69.104.52.157

2010-06-14 11:43:34   Hmmmmm, well since none of you are the owners...perhaps its John and Bonnie's choice as to what they would like to display. I can tell you from personal knowledge and experience; these are two of the kindest most giving people I have ever known as is there family! You should feel honored if you have the oprotunity to know them :). —97.126.134.192

2010-07-17 22:36:08   Sheesh, relax, people. I find it rather heartening that John and Bonnie are brave enough to put up the Christian art despite the huge amounts of criticism it could draw them. I'm not saying I agree with their beliefs (I'm agnostic, myself), but it's good to see people who aren't afraid of exerting a Constitutional right. —74.93.180.102