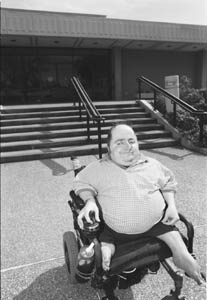 Jonathan Studebaker (May 20, 1965 - April 2001) was a planning commissioner, coach, and motivational speaker. He is the namesake of the Studebaker strip which lines the center of downtown sidewalks.

Studebaker was a Chico fixture for many years, well known for rolling through town in his electric wheelchair.

Jonathan came to Chico in 1983. He volunteered to serve on several boards and commissions, including the Transit Board, and Planning Commission. He also ran for City Council. He sat on the board of directors for ARC of Butte County. He was an advocate for the disabled and always made sure that the Americans with Disabilities Act was being followed.

He suffered from the most severe form of a rare disease called osteogenesis imperfecta which confined him to a wheelchair, and which also meant that he had brittle bones which could break under the slightest pressure.

His autobiography is titled Not Just Any Bag of Bones.

1. No ordinary bag of bones