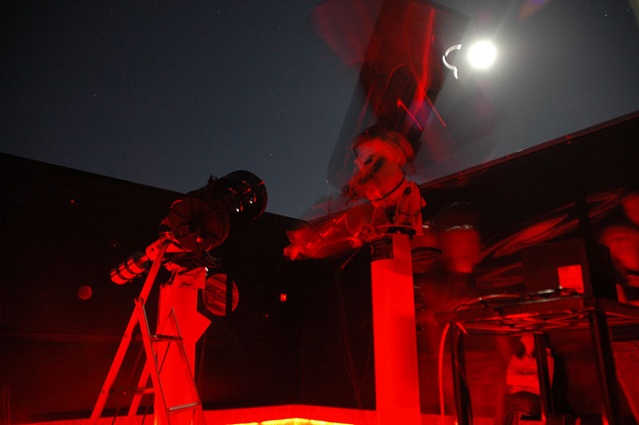 The two telescopes at the Observatory with a full moon. The lights in the observatory are red so your eyes can remain adjusted to the low light

The Kiwanis Chico Community Observatory is unique in that it's one of the first open-sky "planetariums" in the world. It's called the Schoemaker Observatory and is located within Upper Bidwell Park, where light pollution is not prohibitive of star gazing activities.

The observatory's cozy circular concrete structure has highly inclined seats which makes star gazing fun and easy for up to 40 people. The observatory also has hand-held television sets that provide a high-tech window into the universe from the planetarium's telescope. Under clear night skies the general public can learn where the constellations are along with "their associated mythology, general science, and astronomical history"1. Private sessions for schools and nonprofit groups can be scheduled for Monday through Wednesday.

The Observatory current employs two Celestron 14" Schmidt-Cassegrain telescopes. These kinds of telescopes are perfect since they allow a long optical focal length within a compact space. So along with their large apertures, slow focal ratio, and limited field of view, they're perfect for general observing, such as the planets and smaller celestial phenomenon. In addition, the Observatory recently installed a solar telescope that allows easy observations of the sun and its solar activity. Visitors can see sun spots and even solar flares on Sundays from 11am to 1pm (call ahead to be sure) 2.